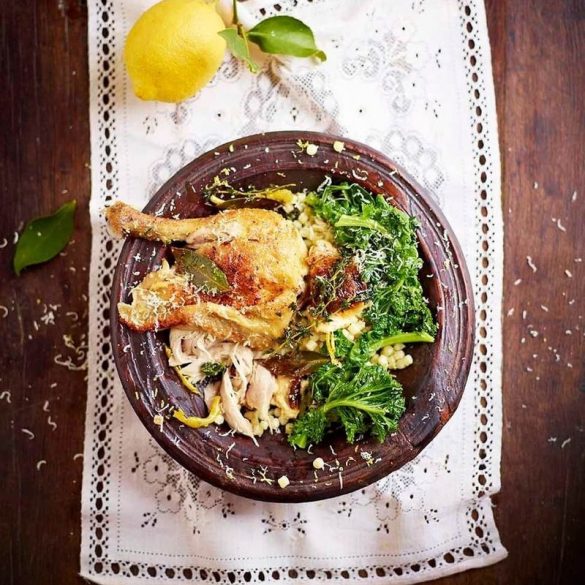 First up, if you’re jointing the chicken yourself, break the knuckles and chop them off with a sharp knife, through the joint. Pull out the wings and cut them off at the base, cutting slightly into the breast so you get a generous meaty portion. Lightly cut through the skin between the chicken leg and breast, so that the leg falls to the side. Bend the leg backwards to disjoint it, and turn breast-side down. Cut between the leg and breast, removing the whole leg, then repeat. Find the joint in between the drumstick and thigh, tap the heel of the knife and cut through the bone, separating the drumstick and thigh, then repeat. Leaving the breasts on the bone, carefully cut between the breasts and backbone to separate the front and back of the bird. Slice between the breasts on the bone to separate, then use the heel of the knife to cut across each breast through the bone, leaving you with two large chunks, then slice each chunk into four pieces. Season the chicken with sea salt, black pepper and 1 teaspoon of fennel seeds. Pop the carcass in a bag and put in the freezer for tasty cooking another day – it makes an amazing stock. Put a large non-stick pan on a medium-high heat with 50g of butter. Add the chicken wings, legs and thighs skin-side down to brown in the pan for around 3½ minutes, or until golden all over, turning occasionally. Once the butter is dark brown and almost burnt, transfer the chicken to a plate and throw away the oil and butter left in the pan. This will leave you with tasty sticky goodness at the bottom of the pan, which will give you a lovely caramelly flavour later on. Return your chicken to the pan with another 50g of butter, and repeat the process, turning the chicken for another 3½ minutes, or until the butter is dark brown, then throwing away the almost burnt butter. Go in with the breast meat and another 50g of butter, and return the browned meat to the pan for a final time along with the bulb of garlic, turning the meat occasionally to get an even golden colour. Meanwhile, peel, quarter and add the onion. Finely slice the fennel stalks, stopping when you hit the bulb, finely slice the leafy tops, and cut the bulb into quarters, adding to the pan as you go. Scrape up any sticky bits from the bottom of the pan, then make a well in the middle and add the final 50g of butter. Use a speed-peeler to peel big chunks of lemon zest into the butter, pick in a large handful of sage leaves and add the cinnamon stick. Fry for a couple of minutes, or until the veg is softened, stirring occasionally. Pour in around 1 litre of milk (half of the chicken should be submerged) and scrape up all the lovely sticky bits. Squeeze in the lemon juice. The lemon zest will sort of split the milk, making a sauce which is absolutely fantastic. Reduce the heat, cover with a cartouche (greaseproof-paper disc) and simmer for 50 minutes, removing for the final 20 minutes. Taste and check the seasoning and remove the cinnamon stick. To serve, pull the meat off the bones and divide between plates. Spoon over plenty of juice and the little curds. Delicious served with Parmesan polenta and lemony greens.

Did You Make This Recipe?
How you went with my recipes? Tag me on Instagram at @PenciDesign.
1 FacebookTwitterLinkedinWhatsappViberEmail